Posted on February 24, 2011 by pussywillowpress

He’s said for some time that he doesn’t feel confident in the paper-crafting area, so I thought I’d make it easier for him by putting together a “Love Note Success Kit”.

I punched a bunch of hearts & other fancy little papers, included a variety of stickers, wrote up an “idea booklet” to get the creative juices flowing & packaged it all in a kitty tin. I tried to list places I’d be most likely to come across a note in the course of my day. Yes, the tin is probably a little floral for his taste, but not too girly (I thought he might want to keep it at school & wouldn’t want to attract too many strange looks) and he does like kitties :).

I gave it to him for our 152-month anniversary a few days ago & he’s put it to good use already :). Yesterday morning I found this at my breakfast spot (which, to my chagrin, I didn’t get to ’till a few hours after he left because I was distracted by other things!). 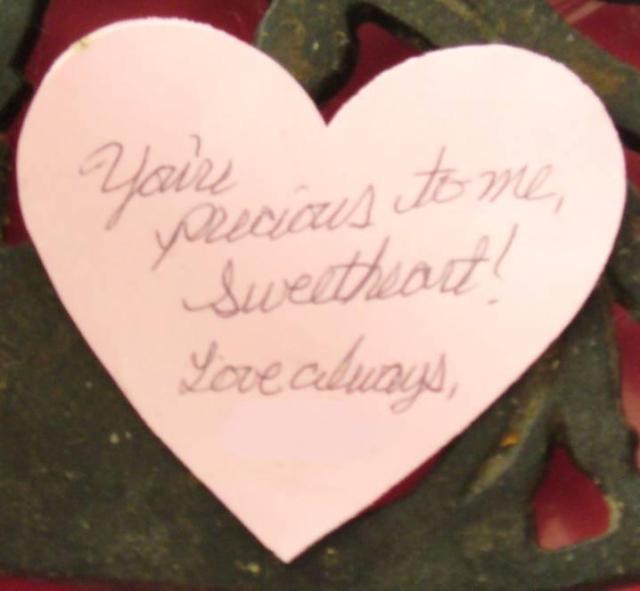 I dashed to the computer to let him know how excited I was :). (although I learned later that my post never arrived?! I tried!) It was a sweet prelude for our date that night :).

When we settled in for the evening, my prince pulled out a photo album at random (turned out to be one of mine from before got to know each other) & we paged through it together, talking about the people & events.

Wow, am I glad those days are over & I’m safely married to my prince :)! It felt like looking at another world. It did cover the wedding at which we first met (as a pair of strangers from two different states who never expected to lay eyes on each other again), and my prince recognized himself in one of the pictures! He was far enough away in the background that it was hard to tell, so I’d never put two & two together before. I remember feeling incredibly lonely that day, never dreaming that my prince was already in the congregation, admiring me (the maid of honor). Even when I met him at the dance, I never expected to see him again. Never did I guess that two years hence we would become Godparents of the same child, nor that our relationship would blossom into romance! (I’d already discerned a call to the convent and was trying to figure out which one God had in mind)

The King knew, though. Our heavenly Father had the timing worked out down to the minute, and had His angels pulling a few strings on the side.